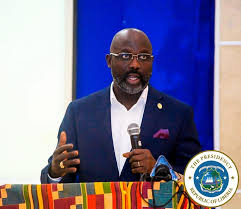 The Government of Liberia has approved the commencement of free tuition in public unversities in the country.

The approval was  given recently by Liberia's President, Mr. George Weah, the auditorium of the University of Liberia's Capitol Hill campus  in Monrovia.

"I, President George M. Weah, on behalf of the Liberian people and the government, therefore declare free tuition at the University of Liberia and other public universities for undergraduate programs,"
"We will never be successful, as a government, if we do not place more emphasis on the development of our human capital and, as such, we have to invest in quality education,"
"I personally believe in education. Therefore, I feel that the constant drop out of students from the various schools is counterproductive,"
"Over the years, we are aware that students at the state-run university have suffered by standing in a long queue for registration purpose, which was due to a lack of a proper system to effectively and efficiently manage students' registration processes. And with the school population up to forty thousand students, it has been a serious concern to us,"
"Let me encourage all students that if there is a problem between the UL administration and the student body, it is important to negotiate rather than to vibrate," President asserted.