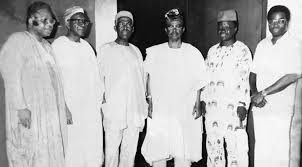 The Progressives : Then and Now

Chief Obafemi Awolowo was a political leader of Yoruba extraction, who lived by example.

His leadership impacted positively on the Yoruba people, in all spheres of life. However, it is doubtful if those who hold sway in this dispensation followed his footsteps.

Chief Awolowo had a formidable political structure that outlived him. In his time, politcal meetings were held at his Ikenne home in Ogun state.

After the passing on to glory of Chief Awolowo, in the days of military rule, Chief Adekunle Ajasin, took over the mantle of leadership and meetings were held at his Owo home, Ondo state.

During this period, the National Democratic Coalition(NADECO) came into being.

After Chief Ajasin did his beat, Pa Abraham Adesanya  took over the structure up till the end of the military era.

In the course of Pa Adesanya's leadership, those who could best be described as pseudo-Awoists and pseudo-democrats, were accepted into the fold, sadly, the true and real progressives were barred, due to the fact that they took up apointments in the military regime of the late despot, Gen. Sani Abacha.

Now known as Afenifere, the group restricted its membership, while maintaining a closely knit relationship with the Alliance for Democracy(AD).

At a glance, Afenifere was composed of the first generaton Awoists, the second 11 and the unknown elements.

The unknown  elements eventually hijacked the structure through unconventionl means.

Of the first generation Awoists, only  a one time Governor of Lagos state, Alhaji Lateef Jakande is still alive.

However, Chiefs Bisi Akande and Segun Osoba belong to the second 11, while others were not yet into reckoning during the functonal period of the group

But present happenings in the political sphere has defied this theory, rather polarization and division are tools that have brought about the present scheme of things.

Of note, is the fact that the progressives of the time past, embarked on laudable programes such as free education, to empower the Yoruba people.

Sadly, capitalist inclined policies, nocturnal ideals and preferences are the working tools of today's leaders in the South-west geo-political zone of Nigeria, to the chagrin of the disillusioned and impoverished people.

The new definition of the progresives includes, but is not limited to, the paymnt of school fees in Primary and Secondary schools, introduction of mulitple tax regime and the preference for  mediocrity and people with doubtful educational qualificatons, to carry out government duties. So sad.