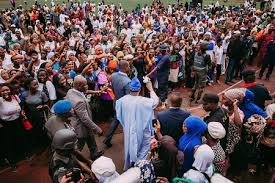 We Shall Vote Out Corrupt Politicians in 2019-Oyo Workers

Nigerian workers have been called upon to vote out corrupt and anti-people political office holders in the 2019 general elections.

This call was made by the Chairman of the Oyo state chapter of the  Association of Senior Civil Servants of Nigeria(ASCSN), Comrade Babatunde Balogun, at a News Conference in Ibadan, Nigeria.

''We will use the 2019 general elections to turn this dismal record around, by voting out the corrupt and anti-masses government in Nigeria at all levels to have a government of our own. Our stand on this is that the nation's expensive Democracy, natural, human and hard earned resources is only serving the interest of the ruling elite who are less than five percent of Nigeria's population, this has placed the plight of the working class and the masses in general on deaf ears.''

Comrade Balogun lamented that those who could afford to spend money were now in control of governance in the country, saying'' the commercialization of nomination forms at the huge amount to aspirants, aspiring to serve the people by political parties is also an indication that our Democracy or ruler ship in Nigeria is for the highest bidder who in return will be coming into office to recover his investment through profit maximization.''

''This ugly situation with the nation's political system means that the political space would be monopolized by only the big boys in the business of looting, who rather than come into office to meet the constitutional social contract of providing basic amenities, pay its workforce handsomely and protect life and property of the electorate, will use the office to accumulate wealth, deny the people of their rights and further plunge the nation into a deeper state of hopelessness.''