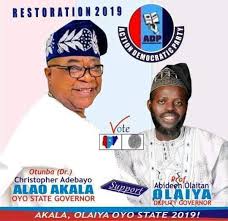 90 Per Cent of Oyo Govt. Policies has left the People in Pain-Otunba Alao-Akala 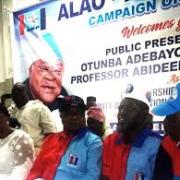 A former Governor of Oyo state, who is also the governorship candidate of the Action Democratic Party(ADP) Otunba Christopher Adebayo Alao-Akala has described the present administration in the state as one  with policies and programmes which have brought pain and despondency on the people.

Otunba Adebayo made this assertion recently, at the official presentation Otunba Alao-Akala and Prof. Abideen Olaiya as the ADP  candidates for the 2019 Gubernatorial Elections in Ibadan, Nigeria.

''My  heart aches because 90 per cent of the outgoing government's policies, programmes and projects are best described as anti-people which leave our people in pain and despondency''.

''Instead of criticizing , I made myself available to guide the incumbent government on how best to run proactive and pro-people governance, but the driver lacks  the required goodwill.

Today the major sectors of  our economy, which are education, health, agriculture and environment have been  either neglected or bastardized Oyo state is in a serious mess''.

''We do not need a learner or  experimental Governor. Leadership is example. Service to humanity especially holding a public office is not a function of age  but mental capacity, experience, maturity, good vision and mission, sensitive, responsiveness, credibility and popular acceptability of a person. I am offering myself again to serve the good people of Oyo state because I am healthily  and mentally fit for rigorous tasks of governance, '' Otunba Alao-Akala.