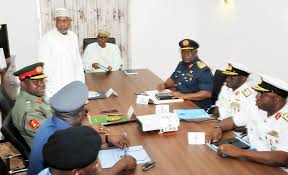 The Aare Kakanfo of Yorubaland, Aare Gani Adams has asserted private security could only thrive when Governors in the 36 states of the Federation and other stakeholders provide necessary support and cooperation.

Aare Adams made this assertion in during an  interview session in a private radio station in the South West Geo-Political zone of Nigeria.

''Communities who engage members of the Oodua Peoples Congress pay them peanuts. The service conditions of private security guards are not well coordinated. As Aare Onakakanfo, I have to consult widely before I take decisions. Nobody can take decisions alone''.

''The Army, Navy, Airforce, Directorate of State Security  and other security agencies are in place to address the herdsmen issue. I am now a statesman, it is their responsibility. When your status changes, you have to exhibit behaviour in line with your new status, if not, you wll run into trouble'', Aare Adams noted.

He also called on President Muhammadu Buhari  to without delay implement the 2014  National conference report, as a step towards addressing the country's challenges.

''About 496 delegates participated in th 2014 National conference and former President Goodluck Jonathan did not waste money on the national conference, however, it would be a waste of financial resources if President Buhari does not implement the report, even if he implements 70 per cent of the recommendations, it is alright, Nigerians are not saying he should implement everything'', Aare Adams concluded