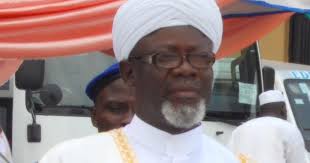 Recently, Vice President Of Nigeria, Prof. Yemi Osinbajo  disclosed that some religious leaders and members of the elite class pleaded on behalf of political office holders and  government officials, facing corruption allegations. Prof. Osinbajo's statement is coming at a time when allegations of corruption are trailing the activities  of several state Governors and government officials, with one of the state Governors insisting that he has spent N200 billion on infrastructure.  Nigerians   have expressed concern and worry over the ability of the leadership of the Economic and Financial Crimes Commission(EFCC) and the Independent Corrupt Practices and Related Crimes Commission(ICPC) to convincingly prosecute the affected officials, including the Kano state Governor, Alhaji  Abdullahi Ganduje.

In this interview with People, the Founder, Spiritual head  and Grand Imam of Shafaudeen-in-Islam Worldwide, Prof. Sabitu Olagoke opines that the personalities pleading with government to forgive those identified to be corrupt are satanic. Excerpts :

What is your reaction to the Vice President's statement that some  religious leaders and members of the elite class plead on behalf of corrupt government officials ?

Let us first  look at the personality of Mr. Vice President, he is a Pastor and a powerful member of one of the most widely spread religious organizations in Nigeria. He is equally a Professor of law and above all, he is the number two man handling the destiny of Nigeria.

Whatever he says now, needs to be viewed along these three lines of personality colossus. From the religious angle the voice of God, is universal from whichever Scripture it mus have come from.

Proverbs 22 : 22-23, says'' Do not rob the poor, because he is poor or crush the afflicted at the gate. 23-For the Lord will plead their cause and rob of life those who rob them.''

The Holy Koran Chapter 5 :62-63 says '' You will see people transgressing in sins, transgressions and corrupt enrichment''.

However the elite who perpetrate this  evil of institutional indiscipline ought to have been made to face judgement through the admonitions of the Doctors of Law, as well as the heads of religious houses, who will be directly answerable  to the queries from God.

If Mr. Vice President's statement should be judged against this, he would be  found wanting, as a Minister of God, Professor of law and as an elite in the political realm. From the Governors and the political angle, the Vice President violated the international rules of law against corruption and the need for accountability. For example, Transparency International defines corruption as the abuse of  entrusted power  for private gains The United Nations Development Programme defines corruption as the misuse of a public or private position for direct or indirect personal gain.  It further defines accountability as an obligation 1) to demonstrate the work that has been conducted in accordance with the agreed rules and standards. 2) Report fairly and accurately on performance results vis-a-vis mandated roles and / or plans.

Accountability refers not only to those in power, holding their subjects to account, but also to the authorities, both public and private, been held accountable by their citizens.

The Vice President and the entire government workforce need to role model all these, and stand firmly on the rule of law  to bring to book all  suspects in the arena of institutional indiscipline and corruption, including those so called rotten religious houses in Nigeria, which have enjoyed most from the largess derived from treasury looting.

It also provides citizens with information, they need to measure and judge the progress of the government of the day as well as  to enhance good conditions of service.

Voices from the houses of worship demanding that government should look away or forgive  corrupt officials will continue to be satanic, until these worship centres are re-orientated towards supporting the cause of the anti-graft agencies, because the impact of corruption in Nigeria has been detrimental as it has stalled progressive development, it has been one of the greatest factors responsible  for the growth in poverty, lack of progressive advancement and internal conflict, as we can link it to underdevelopment.

It has also led to unequal access to power, resources and positions between men and women, as well as the wise poor and the foolish rich.

Besides the above, government  has to get the root of Democracy as established in Greek-egocentredness, is likened to the status of an idiot. Self has no place in governance, clan or ethnic based consideration extended to nepotism will continue to lead to barren development.

Nigerians, generally, from religion, culture, community and ethnic nationalities need to be integrated into an altruistic philosophy for the development of the entire  citizenry as a way of achieving patriotism for true and correct nationhood.

Most  edifice like structure in Nigeria, are products of treasury looting.

Presently, Nigerians are being indoctrinated into the culture of self-enrichment as a way of life, rather than the dignity of labour that would have aided innovation and creativity, which are the bedrock of true  development.