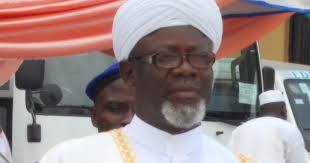 As Nigerians continue to knock the President Muhammadu Buhari led administration’s elective fight against corruption, the spiritual head and founder of Shafaudeen worldwide, Wakajaiye, Ibadan, Nigeria, Prof. Sabitu Olagoke, in this interview with Federationews2day, says that the present administration’s corruption fight,  has the traces of  the corrupt class who funded its emergence. Excerpts:

Nigerians are expressing worries  over the present administration's continued selective corruption war, what do you think is wrong ?

It is unfortunate that the All Progressives Congress(APC) was formed on the basis of looking for credible people, they were able to get that in President Muhammadu Buhari, but how to win the election depended mainly on who could fund the party. Unfortunattely, most of those people, who have the strenght to do it,  belong to the corrupt class of the nation. It happened in Singapore, when Lee  Kuan Yew wanted to moun the reign of power, he had nothing, but was sponsored by those  who had amassed ill gotten wealth. Fortunately for them they were able to have a memorandum of Understnading(MOU) and they agreed with him, to suppor the cause of sanitizing the country in order that Singapore would be great again . That was how they were able to have their way. Singapore today, is a country that competes with the developed world, but in the case of Nigeria, the same scenario of change is not in play. Unfortunately, the big wigs in the pary are not ready to, let go of their ill gotten wealth.

At a time the President became ill, the illness was not natural, it was not, from God.  And that is why he cried out. When you fight corruption, corruption may want to fight back. If not for God, the illness would have c onsumed him and that would  have been to the advantage of the cabal and cartel, who would have returned to their free meal of ill-gotten wealth,amidst the turbulence surrounding this Government of President Buhari. Despite the fact that he survived the death threat and fire, his manliness began to fail him into mortgaging his conscience.

By now, dily dallying with the cabal, in taking some decisions, most especiallt the delayed ones. It is unfortunate, that his people are not helping him to succeed in the anti-corrution war, because they are damned to many and  too powerful.  Unfortunately, nobody wants to die again for the antion.  A comparative analysis of Nigeria and some  other nations, shows Nigeria as a  nation that has failed the test of corporate governance, leading us into the stage of building strong individuals, rather than strong institutions.