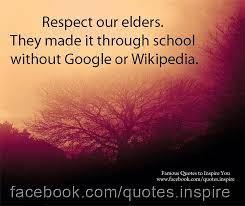 The word respect is an attribute that usually manifests in mankind and animals as an attitudinal outburst that has direct bearing with humility.
Between man and God, obedience to the rule of law as dictated by the almighty is a perfect condition under which man's prayer request can be granted. This implies that respect is better appreciated by a superior person when his will is followed.
In all spheres of human endeavor, respect is a common denomination through which we can realize cordial interpersonal relationships which by extension would lead to the realization of one's desire and the creation of peace for the environment to be conducive for all in our day to day activities.
A child carries out the will of its parents to attract their love and readiness to carry out their responsibilities on such children without looking back.
In the traditional setting, age is regarded as topmost for parents and the elderly ones including siblings.
When this is violated, a situation of bad blood is created to generate hatred.
In other of our lifestyles, respect is either commanded or forced through such privileges of wealth, influence, and affluence that make one become a star or superstar or personality worthy of focus in the society.
Respect for the positions of influence such as that of the Kings, parents, Chiefs, and business persons is established naturally when the environment of ethical revolution or practices is identified in such a person's struggle or rising profile to stardom.
Hard work, self-esteem, and other attributes of good conduct always attract respect.
However, when the end cannot justify the means such as in the case of politics with deceit, wealth through foul play, positions of influence through diabolical means, certification through fraudulent means, respect is easily lost because the end must justify the means.
Today, several societies have lost the culture of commanding respect even from the people they serve because of the various diabolical ways through which they achieve their aims. 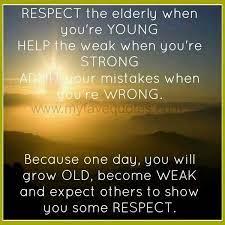 Rich people are taunted and despised and people are afraid of seeking help from them not to become a perishable material for ritual purposes.
This occurs mainly in such societies where the dignity of labor is lost and acclaimed successes are achieved and recorded through smart practices that lack merit. In this circumstance, armed robbers, ritualists, and other categories of criminals may become Obas, Obis, or Emirs and will be surrounded by charlatans who will be installed and paraded as Chiefs with an overwhelming power of control over the wealth and resources of the society.
Such personalities may be hailed by the people who would ever believe that the material wealth of the personalities is being forced on them, not necessarily as the right choice for the positions they occupy. Proverbially, the Yorubas will say that the world would continue to be in disarray when the elders are not given the accorded respect.
Parents do serve their children, teachers serve their pupils and students to give them the fundamentals of life so that in return after becoming senior citizens, the children when they grow up, would be able to take over the reins of power as regards parenting, teaching, and governance.
For every responsible parent to now have a bequeathable legacy, the children and the youth must learn correctly, to imbibe the value of respect for siblings, peer group, identified and distinguished talents, elders, and constituted authority.
We must not forget that the beauty of teaching and learning lies in our products having respect for all the above mentioned.
Let us all learn to respect ourselves by doing things accordingly based on due process and let us respect the views of others and the talents in them including age and other worthy values for us to be able to create a well-ordered society with accelerated development that is free of corruption to be able to enjoin and promote a bequeathable legacy. Respect and acknowledge others.