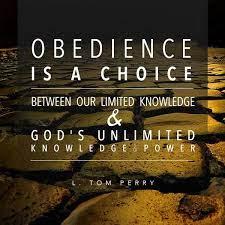 The design of God about creation in all spheres-celestial, terrestrial and subterranean is based on a hierarchical order. This is the basis upon which leadership and followership essence is built for system orderliness to be maintained and sustained.
However, among human beings, several factors define the due process for the realization.
Age differences within and outside the home is the primary determining factor whereby respect is naturally commanded by the elderly ones by their younger ones. This style of respect allows the elderly ones to give instructions to the younger ones to carry out certain assignments for them.
In this case, the elderly ones must pay the price for being socially responsible to the younger ones, if the line of respect manifesting in the form of obedience is to be maintained or sustained.
The husband will continue to be obeyed by his wife, primarily because of the age difference and the responsibilities of protecting and making provisions for the home.
Among the siblings, the age factor plays a crucial role in maintaining the order of obedience with the characteristic normal line of downflow current of command and upward flow charges of obedience.
Obedience, therefore, has a divine base that starts with God, the creator, demanding mankind and other creatures to swim in the ocean of obedience to His divine command.
This is, generally, followed in all systems of human administration whereby all subordinates are expected to carry out the command of instructions from their bosses or leaders.
Using the perspective of culture, the line of rulership usually follows the hierarchical order of the chiefs been respect by the people while the traditional rulers usually live by the laws of the land for the chiefs and the people to be in obeisance to his instructions.
Where the line of administration meets with the natural challenges of heterogeneous group components, the system order is always under the threat of disruptions to peaceful co-existence.
This is why all leaders must be well empowered with the paraphernalia of authority through the right capacity and capability building. to be able to weather the storm of possible rebellious acts from any of the chiefs or people of the underworld, who may hide under the guise of fighting for their rights.
There is, therefore, the need fr anybody aspiring to ascend to power or positions of authority to follow the path of due process to be able to use power wisely and enjoy the support of the subordinates.
In any organization or association, there are three major types of challenges for the leader.
Firstly, the leader must be able to identify the nature and the type of people under his leadership.
The prime movers, who easily identify with the policies of the leader to walk the talk must not be taken for granted, but with timely attention given the necessary motivation.
The second group may become a liability because of their lackadaisical attitude which may become a special hindrance factor to the system development because of their attitude of inactivity and passivity.
This is why the train the trainers' programs are usually needed periodically when such people are noticed in the system for them to be upgraded so that the fold of the prime movers is increased by better and manageable elements.
The third group is always very few, but usually catalytic to a destructive ned to the system, if not timely identified and rightly cultured through the leaders' sense of maturity and wisdom to resolve conflicts and manage a crisis.
Suffice it now to say that obedience, from working partners and subordinates, usually moves forward because of advancement to the organization for the aims and objectives including the vision of the leader to be easily accomplished.
When obedience is lacking there would be voices of dissent which would retard the growth of the organization even to a destructive end, if not timely and rightly checked. 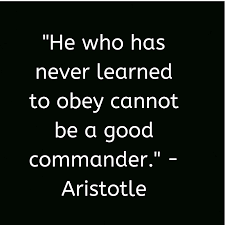 Obedience is, therefore a divine substance that is freely given out when leaders can respect the fundamental human rights of the people to have access to any of the good things of life.
For example, when governance does not meet the wellness standard of the people  through food insecurity, the issue of general insecurity could be likened to the response to the harshness of the time, in terms of poor governance that cannot meet with the expectation of the people's needs, disobedience to social order and the general rules of law snowballing into various crisis is, therefore, best treated and managed through doing the needful by the people in positions of authority.
Security and law enforcement agents become beasts of burden that are usually overtasked in maintaining law and order in the land when the leaders fail to do the needful on the survival need of the people.
In our various places of work, charges of insubordination may arise when the official duties are not carried out accordingly and without the show of remorse to make amends and it may lead to various unpleasant sanctions or disciplinary actions.
Obedience, therefore, is a function of self-respect, right performance, and a conducive environment for individual operations which are expected to be within the confines or ambits of the law.
Leaders across the board must, therefore, operate on the axis of justice and equity to be able to effect an environment of peace and development to avoid a state of disobedience from the people because it is only in an environment of peace, safe and secured, that we can realize prosperity and development for natural calmness to trigger obedience.