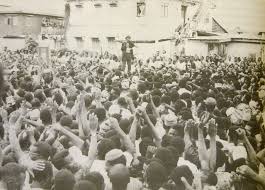 The need for an increase in wages and better working conditions prompted Michael Imoudu to lead a demonstration from the locomotive yard in Ebute metta, Lagos to the Government House situated at Marina, Lagos Island, Lagos.

The Governor General of the Colony of Lagos, Bernard Bourdillon noticed that any form of industrial action at that period, could disrupt railway supplies to the coalition, during the Second World War in 1941. It was on this premise he acceded to a 50 per cent pay rise for the workers.

This success, further inspired Imoudu to put forward more demands, among which were conversion of daily casual labour to salaried employment, Saturday work with pay, permanence of daily labour, holiday travel grant and payment of arrears to cover 1932 to 1942 of unpaid entitlements.

This did not go down well with Bourdillon, who facilitated the termination of Imoudu’s appointment on 23 January, 1943 and also ordered his arrest under the Nigeria General Defense Regulations, 1941.

In quick succession he was relocated and remanded at the Benin prison, while in prison, he influenced inmates to demonstrate against poor feeding and other deplorable prison conditions.

In response, the British Colonial Government in 1943, restricted Imoudu’s movement to the palace of the paramount Chief of Auchi and made an order for him to report twice a week to the Auchi Police station.

As a result of a face off with the District Officer of Auchi and his moves to facilitate the establishment of peasants’ cooperatives for the benefit of peasants in Etsako and Ora, he was again remanded in the Auchi prison.

Some of his comrades, including T.A Bankole openly spoke against Imoudu’s action, to the hearing of the Chief Secretary of Government.

After spending two and a half years in prison, the labour activist was set free.

A mass rally was held at Oko-Awo, Lagos to celebrate his release from prison, while nationalists such as Herbert Macaulay were on ground to grace the occasion.

The industrial action was hinged on the inability of the colonial Government to actualize the promise of Bourdillon in 1942, to review allowances according to living index.

This resulted in the abrupt end of the unpopular Richards constitution, and set the stage for self government.