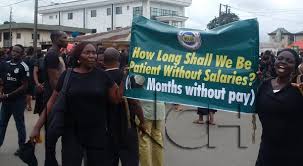 The Mindset of the the Government Worker in Nigeria

In the present time, in Nigeria only a handful of civil and public servants take their duties seriously and wholeheartedly.

Their attitude is directly related to the position of government  in the three tiers on issues of workers' welfare and conditions of service.

Indeed, the  focus of those on government payroll in any given line of duty  or assignment is what is in it  to gain  and not what is ought to be done. In other words, selfless devotion to duty is no longer there.

Assigned  tasks in the  Ministries, Departments and Agencies are no longer done properly and promptly. A sizable number of  workers, no longer possess senses of responsibility. Who is to blame ?

For several years now, the monster of indiscipline has continued to fester. with due process as the major casuality. The struggle for ''power'' among government workers  is the most prominent activity going on in most offices.

Sharp practices are the order of the day, this is partly as a result of the  sectional Democracy in vogue today.

At the Federal , State and Local government levels, workers, who are co-opted to generate revenue  for government, make good use  of the opportunity to protect their future .

The source of inspiration for these category,  of workers include stories of government  workers who retired in 2010 and are yet to be paid their gratuities.

The popular discussion in most government  offices is the backlog of salary arrears owed workers, even though Comrades Ibrahim Yinsua Olayiwola and Adejare Ahmed of the Oyo state branch of the Association of Senior Civil Servants of Nigeria(ASCSN) are of the opinion that workers should be devoted and committed to duty, to avoid  negative reports from their superiors.

The worrisome question everywhere at present  is : has the insensitive attitude of government  ensured workers devotion and commitment  to duty ?