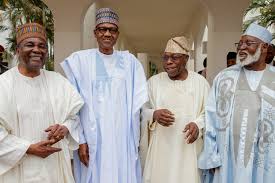 The financial greed of political exposed persons in Nigeria is a major problem of nation building.

Indeed, when Chief(Dr.)Olusegun obasanjo was the President, the then Inspector General of Police, Tafa Balogun, his kinsman, was put forward as a model to discourage financial crimes.

Till date, the Former Inspector General's travails is a talking point.

Nigerians are laready exhibiting intolerant behaviour,perhaps, in violation of the 1999 amended constitution, to oppose a second term presidency for President Muahammadu Buhari. Why ? The anti-corruption fight in this dispensation has not been impressive among other neglected aspects of governance. The former Secetary to the Government of the Federation  and several other high profile public office holders remain credible reference points.

As mediocrity becomes the popular choice for political office holders at the Federal, State and Local Government levels, hitherto  vibrant institutions have been weakened to damaging and ridiculous levels.

The President's constitutional breaches have come under the heavy 'fire power' of moral indignation by milions of Nigerians, with the President's media handlers reacting feebly and unconvincingly.

Interestingly, Nigerians have interpreted the statement creditied to the Director General of the National Identity Card Management Commission(NIMC) that embarrassment awaits Nigerians who have not registered for the Nationa Identity Number(NIN), as an open threat and subtle intimidation.

The Commission had earlier in the year, lamented that lack of funds was limiting the commission's plans to produce the National Identity cards for Nigerians. Why the sudden desperation to ensure that Nigerians obtain the NIN ?

Part of the answer lies in the statement by the then Deputy Speaker of the Delta state House of Assembly, Pius Ewherido in 2005, ''Looking for an ethnic plaform, I think negates the entire concept of Democracy''.

Also of worry, is the alarm raised by the Independent Natonal Electoral Commssion(INEC) that the  Permanent Voters Cards(PVC) are been cloned, this is coming on the heels of reports that desperate politicians are already purchasing the PVCs from uninformed Nigerians at the grass roots.

The situation is made more confusing, with the satement of the Minister of Communications, Barrister Adebayo Shittu, that there are threats to the country's cyberspace. How ? And why is it coming at a time that elections are coming up in Ekiti and Osun states, while the 2019 general elections is alos around the corner. Perhaps, Government is stll hiding a lot from Nigerians.