Is One Week Enough for INEC To Address The Glaring Lapses ?

There is widespread discontentment across Nigeria, against the postponement of the Presidential, National Assembly, Governorship and the  State Houses of Assembly elections by the Independent National Electoral Commission(INEC) .

Nigerians are fully convinced that there is a lot of foul play, regardless of the reasons put forward by the INEC Chairman, Prof. Mahmood Yakubu.

Interestingly, the Minister of State for Aviation,  Sirika Hadi insisted that the INEC Chairman's claim that bad weather contributed to the postponement of the general elections, was a lie, while stressing that airports across the country were directed to remain open round the clock.

Before the eventual postponement, Nigerians were subjected to funny treatment by INEC staff, in their bid to register and  collect their Permanent Voters Cards(PVC) in several parts of the country.

Sadly, a large population of Nigerians are yet to collect their PVCs , just as INEC  has refused to make public the total number of PVCs that have been collected by prospective voters nationwide.

Of note, is the fact that Prof. Yakubu has admitted that the Senatorial candidate of the All Progressives Congress(APC) for the Niger East Senatorial District of Niger state,  Mohammed  Sani Musa, was a registered contractor with the commission.

Musa's company, Activate Technologies, is responsible for the supply of the machines that INEC used to print the PVCs.

Even though Prof. Yakubu asserted that all is well, this is far from the truth, considering unfolding events that has made it very glaring that the electoral process has been compromised.

Of great worry, is that fact that the INEC headquarters has recalled all the Smart Card Readers(SCR) from all its state offices in the country. Why ?

This is the reality of the present time.

The electoral process had long been designed to suit the wishes of the ''POWERS THAT BE''  and the postponement was just a face saving strategy. 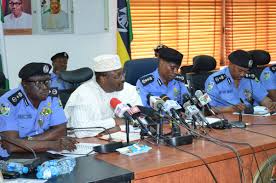 Most members of the National Youth Service Corps(NYSC) recruited as Ad hoc staff by the electoral umpire, had earlier on influenced their NYSC postings to choice states, while a negligible number of those who were lucky to be recruited by INEC, were stranded on the day of the postponed elections.

They had no accommodation, the commission did not release their allowances and most of them were unable to locate the polling units they were posted to.

In the Oyo state office of INEC, a day before the postponed  general elections, Journalists and Observers were sighted  in business centres making frantic efforts to laminate their passport photographs on the  papers, officials of INEC gave  to them as accreditation.

Sadly, these papers might have got into the hands of individuals who have perfected same for an unknown agenda, although the commission received adequate funds to  facilitate a convincing accreditation exercise for Journalists and Observers.

A Lagos Lawyer argued that it was illegal for the Acting Inspector General to restrict the movement of people and vehicles during elections.

The action of the Acting Inspector General might have made the electorate to lose confidence in the system.

Also disturbing, is the issue of the head of the electoral body donning the face cap with the logo and colours of the ruling party in a Television documentary.

Top politicians, speaking incognito, argue that the letter the Attorney General of the Federation, Abubakar Malami wrote to the commission, requesting for the postponement of elections  in Zamafara state and the lingering crisis in the ruling party's Rivers state chapter, contributed to the sudden decision of the umpire to shift the date of the general elections.

With several lapses still waiting in the wings to pop up and the pretense of the commission that it would correct  the situation within one week , it is doubtful if one week would be enough for the commission to address the several shortcomings, man-made or designed, to enable Nigerians elect a new generation of leaders that would steer the troubled ship of governance for the next four years.