Why We Called Off Indefinite Industrial Action-AWC 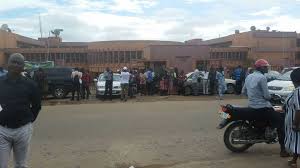 The All Workers Covergence(AWC) has said that the indefinite strike action it facilitated was called off after achieving its major purpose.

The AWC made this disclosure  in a chat with People through its National Coordinator, Comrade Andrew Emelieze.

''The protest was meant to be an indefinite strike action and shut down of the Federal Secretariat Complex, Ibadan, which was successfully done on Monday, 29, July, 2019, at the end of the day the workers converged and it was unanimously agreed that having created the needed awareness there was the need  for a review.''

'' Moreso, the protest was  not meant to deny  people of their rights, we therefore decided to observe reactions surrounding the protest and  based on the reactions we received, we decided the next line of action. Most importantly, the message has been sent to the right quarters and workers have been freely able to express their displeasure, anger and unhappiness over the non-implementation of the new national minimum wage, the continued kidnappings, killings and other violent crimes of innocent Nigerians at home and abroad.