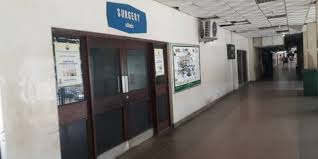 We have dispute with FG not NGO-JOHESU

Govt. Has Failed in Its Responsibilities-AWC

Health workers in Nigeria have clarified that the ongoing   indefinite industrial action was embarked upon to compel the Federal Government to meet their demands, just as they insisted that they have no dispute with any Non Governmental Organization.

This clarification was made in a chat with Federationews2day by the spokesperson of the Oyo state council of the Joint Health Sector Union(JOHESU), Comrade Olabode Akinfenwa.

''We are not in dispute with any Non Governmental Organization(NGO), we are in dispute with the Federal Government. Also, we are not aware of the National Industrial Court Judgement. We have local issues that  are yet to be addressed by the Oyo state Government. There is preferential treatment in the health sector'', Comrade Akinfenwa noted.

In the same vein, the All Workers Convergence(AWC) has attributed the indefinite strike action embarked upon by health workers in the country to the fact that government at all levels have abandoned their responsibilities. It only shows how irresponsible government is. Is it a Non Governmental Organization(NGO) that will intervene in such a sensitive issue that has to do with  the health of Nigerians. Even the NGO cannot be trusted. It might likely have an ulterior motive. Government in Nigeria has lost its sense of Justice and equal rights''.

This position was made known by AWC's National Coordinator, Comrade Andrew Emelieze.

''Painfully, it is the traveling out of President Muhammadu Buhari, for medical consultation to London, when the health sector has been grounded by a nation wide strike, that is making its suspension difficult, even though the President traveled out to save his life. For us, in AWC, this act is not only irresponsible, but callous'', Comrade Emelieze noted.