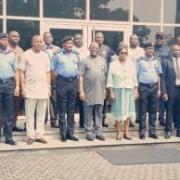 Mr. Wike who made this declaration when  the new Commissioner of Police in the  State,Mr Usman Belel, paid him a courtesy call, appealed to  the police to improve on their performance .

“People are beginning to lose confidence in public institutions in the country. I believe that as the new police commissioner, you will work for the confidence in the police to return”.

“Your predecessor allowed himself to be used by thugs to invade the courts in Rivers State. The Chief Justice of Nigeria called for the investigation and prosecution of those that invaded the courts, but Zaki Ahmed refused.

“Rivers State will not forget that it was Zaki Ahmed’s time that thugs invaded the Rivers State High Court, which is located near the police headquarters. He didn’t bring anybody to boo