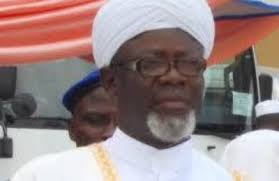 Nigerians insist that religious leaders and institutions have not done enough for those who eventually emerged to contest of political offices for several years, this has become a source of worry for the electorate, who believe that their votes have never counted in most elections. In this interview with Federationews2day, the Spiritual head and Founder of Shafaudeen-in-Islam Worldwide, Prof. Sabitu Olagoke advises religious leaders to refrain from distributing loot of the affected political office holders among their congregation, in a bid to seek divine favour. Excerpts :

How do you think religious leaders and institutions can ensure the emergence of credible candidates in the 2019 Presidential elections?

First and foremost, Nigeria has a fundamental problem, with respect to the issue of religion. They fail to realize that all religions are working towards the same aims and objectives, one, to educate and enlighten into self realization for the necessary reform into the state of piety and integrity, two, to ensure that adherents have tranquility of mind, three, to promote peaceful co-existence, in order that the community or society enjoys  high level of security.

Religion therefore, is to work on every individual, irrespective  of ethnic or religious differences, to be credible enough to hold in trust, positions of responsibility and power, in order to serve God, through beneficial service to humanity.

However, in Nigeria, religious institutions celebrate profanity, in place of sacredness and hence, fail to produce credible candidates for the purpose of transformation of the society.

With this poor background of Nigeria's religious people, there is no way that they can perform the role of an umpire, whereby, religious leaders, would be able to see themselves as true Fathers of political leaders and true advisers for  correct political practices, that would be Scripture compliant and enjoy the favour of God, through the benefit of uninterrupted divine intervention into human affairs-social, economic, political- for the purpose of achieving, in the areas of the clarion call by the United Nations, of the essence of establishing and promoting sustainable development.

To worsen the case, the Federal Government till date, have been superintending a dysfunctional educational system, which has promoted half baked graduates, which is very glaring for all to see. Observe political office holders and Technocrats, in the Ministries, Departments and Agencies, institutional indiscipline and corruption that  are the order of the day.

For the purpose of the fast approaching 2019 general elections,religious leaders must refrain from sharing the loot, stolen by politicians, to derisively , seek the favour of God.

We must all realize the golden advice of Nelson Mandela, that religious leaders need to face the reality of the situation, that no politician is either  a good Muslim or Christian in Nigeria. They believe in sourcing for power from gods and goddesses, but always deceive the innocent masses through religion by propaganda, in order to rule over them.

If  truly Nigeria's religious leaders are working for God, they must join the bandwagon of advocates for promotion of functional education and necessary empowerment processes for our youth, who are  future leaders and  expected to be able to turn around the system of poor governance into that of people oriented and positive political governance, that would  have the very necessary positive impact on the lives of the people. Take not of the fact, that the same people who attend religious houses are the same people, we have in the Ministries, Departments and Agencies, in Government, in the Independent National Electoral Commission(INEC) and the society at large.

Mosques and Churches must refrain from religious propaganda of prosperity, that has led many Nigerians into the world of magic for quick money making ventures, ritual killings, kidnapping and several others, but instead, we must all be role models, as religious leaders, running functional Churches and Mosques, to reform adherents, into scripture compliance, for the purpose of having credible leaders with integrity, who will be able to administer a corruption free society.

For the 2019 general elections, the roles of the Churches, Mosques and other faith based organizations, is to stand by the  truth and the Scripture, to be able to be credible enough, to give  advice which will have the desired impact, as well as to have  their prayer requests for a free and fair  elections to hold.