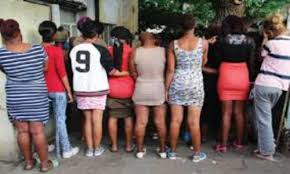 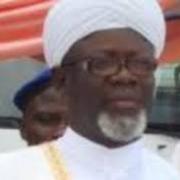 Child and Human trafficking have become means to an end for several Nigerians who have lost hope in the system under the present administration.

Reports of these ugly trend are recorded on a daily basis, with the law enforcement agencies struggling to stem the tide.

Baby factories are on the increase while mothers, mostly the young ones, sell their new born babies to cushion the effects of the present economic realities.

Teenagers and adults are deceived into traveling abroad, but end up as prostitutes or slaves. This trend in not abating.

In this interview , the Founder, Spiritual Head and Gran Imam of Shafaudeen-in-Islam Worldwide, Prof. Sabitu Olagoke opines that poor governance which has brought about poverty is the major cause of child and human trafficking

Child and Human trafficking is what a sizable number of Nigerians engage in these days. Why is this so ?

Nigeria was first a country where discipline, control the fabric of all social spiritual sub systems . It was characterized by very low import index and very high export index. Religious laws were in tandem with the societal norms to create a path of sanity for our interpersonal relationship and our general attitude towards values.

Unfortunately, the Nigerian youth in the mufti of the military killed the geese that laid the golden eggs. Since then, value erosion crept in to destroy all agents of socialization for the nation, to stand with very weak legs.

The civil war followed to put us into alien idiosyncrasies, whereby every moral value is replaced with overtures of waywardness and frivolities starting from the home front to push the society into a state of moral decadence.

The most pitiable aspect was the era of searching for greener pastures in the houses of spirituality whereby we replaced sacredness with profanity and we commercialized, against the tenets of the scripture on the word of God.

Sins committed by people became the software which now transformed into the hardware of criminality.

FESTAC ‘’77 promoted culture as if its is a twin brother of satanic practices. We gave voodooism priority to trivialize the essence of puritanism in religious worship, modesty was murdered to be replaced by shameless acts of fraudulent families while dignity of labor was placed into poor second for various malpractices by the youth to be aided by the elders.

The sociopolitical and economic life as well as our state of spirituality thereafter became badly affected.

All media is able to report, is a micro version of the real happenings in the land. The issue of child and human trafficking therefore, emanated in the land as a result of the dichotomy been introduced by the ruling class whereby the suffering masses continue to suffer from impoverishment, while the ruling elite turn democracy into a money makig opportunity through the concept of ego centrism to change democracy into kleptocracy as evident in the rising profile of poverty indices, 15 per cent in the 60s followed by a progressive arithmetic of 28.8 per cent in 1983 , 42 per cent, 54 per cent, 65 per cent under the subsequent military regimes while the National Bureau of Statistics presented the economic experts evaluation in 1999 as 70 per cent.

Since then, up to the 9th National Assembly regime, it is yet to be improved. For example, in 2007 to 2009 more than 849 companies relocated to other African nations because of our bad economic climate for investment. 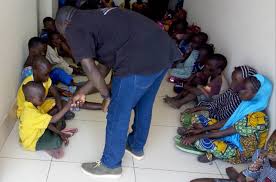 Many abandoned warehouses became places of worship that could never provide employment for the teeming masses, most especially those who were retrenched as a result of the collapse of companies.

The youth who were mostly affected became ordinary pawns in the hands of dubious elders who played the smart card.

Anti social menace arose, as a result of the emerging proffered alternative to survive in the race and crave for greener pastures. Armed robbery, arson and active participation of the youth in various insurgencies and militant activities were effective as a result of drug addiction with attendant abuses.

The con people hid under the bad economic situation to deceive the youth into the various illicit practices, ranging from visa scam and cases of forgery of documents, with sweet promises of jobs in abundance without consideration for certificate worth.

Many died in transit, most especially those who plied Libya en route the desert to the promised abode of succor. Some of them became victims along the journey, whereby they were always hammered into a corner and their kidneys forcibly removed, resulting in their deaths. This practice brought good money for the smart guys in the medical world of kidney transplantation.

The most popular but destructive form of trafficking , is deceit of the victims by promising them jobs abroad, which later turn out to be prostitution via several underworld conspiracy against legitimate governments.

The bottom line that is making this bad attitude to flourish is the issue of poverty and poor governance which needs to be squarely addressed through the following steps :

One, engaging the citizens through effective sensitization through the National Orientation Agency(NOA), and the mass media on the dangers of getting involved in the trafficking of persons.

Secondly, government must reform all institutions to be effective enough in promoting sanity.

The judiciary must be firm as partners in progress with quick interventions on emerging cases while the agencies which are directly concerned must be rightly strengthened to do their work without fear or favor and timely too.

Thirdly, we must revive, for the purpose of the restoration of core values, all agents of socialization such as the parents, schools, religious houses, voluntary organizations and a host of others.

Be responsive and responsible in the process and crusade of core value restoration.

Above all, let government officials be role models on the issue of decency, chastity, drug free life, with total pursuance of zero tolerance to corruption with no respect for institutional indiscipline.

The issue of role modelling of exemplary lifestyles by parents and the elite is equally sacrosanct to the promotion of the issue of integrity as a key factor to core value restoration.

When government pursues, realistically, the issue of vocation for the establishment of Small Scale Enterprises(SSE) and Small and Medium Scale Enterprises(SME), youth restiveness would be minimized because they would be meaningfully engaged with focus on job creation, self-employment and self discipline.

Let government use the SWOT analysis to re examine the situation to do the needful in order that we can walk the talk to correct all aberrations at 59.

Also read : Nigeria at 59-Only The Beneficiaries of the Lapses in Governance have a reason to Celebrate-Prof. Olagoke here-https://bit.ly/2nctwYX