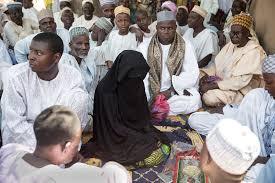 The marriage institution is a blessing to mankind to raise man up to a higher plane of operation above the animals which go about reproductive processes without nay guide, once they are moved into the romantic ecstasy of love affairs, they mate at all costs with their weaker female counterparts even their mothers, except in the known species of the horse which has never been into the practice of incest and the weaver bird which obeys a perfect arrangement of divine importance to go through clean courtship period before they finally go into wedlock. A male weaver bird at the ripe age of puberty stage woos a female counterpart for days and months, during this period they will have nothing to do with mating and illegal sexual experience. The male is charged by the female to build a nest to prepare for the housing need after going into wedlock.

The female, upon the male's claim of completing the nest, would be invited to examine for acceptability the newly built nest, if it is not acceptable by the female counterpart, the male has two options to rebuild to the female's taste or lose the female to another more serious male elsewhere. When eventually, there is a consensus, they move in immediately to commence their honeymoon as a newly wedded couple.

The reminiscence of this can be likened to the marriage institution process for mankind, our culture and religion agree on fidelity concept for nay marriage solemnization to take place by the Alfas or Pastors.

Luckily, for the institutions of culture and religion, the backup Scriptures are there for the perfect guide. For example, the culture of fidelity on the part of the male and female must be upheld, most especially on the premise of virginity of the girl-child and abstinence from promiscuous acts. On these, the following factors of conditions must be ascertained before any marriage solemnization take place-1)mutual consent between the two intending couples to ensure maturity on both sides, absence of forced marriage, and a case of minor marriage to respect the fundamental human rights of the intending couples to feel and realize love in the proposed contract. Secondly, research-based consent of the parents of the male and the female for the marriage to take place with due regards for their children's state for the mind and wellness factor as well as ascertaining the suitability of the intending in-laws to be integrated into both families for a better future of the marriage.

The third is the factor of weaknesses to the journey of the intending couples to avoid future allegations by people from outside the marriage which is usually revolving around charges of infidelity and cheating which may ultimately lead to disaffection in the newly formed family and possible separation or divorce.

The fourth is the intending husband's appreciation of winning the hearts of the sweetheart, this is always appreciated through a substantial amount of money for the male winning the love of his heartthrob(Quran 4: 4.'' And give your wives their share of the dowry and then if they willingly participate in it with you, it is not objectionable and is legal for you.'')

With all these perfect arrangements from God, why is it that many marriages suffer from separation or divorce? Knowing fully well that Jesus Christ condemned the practice outrightly because of its socio-spiritual implications. For example Mathew 5: 31-32 is sufficient to guide to go about marriage and keep it.

31 “It has been said, ‘Anyone who divorces his wife must give her a certificate of divorce.’

32 But I tell you that anyone who divorces his wife, except for sexual immorality, makes her the victim of adultery, and anyone who marries a divorced woman commits adultery.''

The fallout of broken homes is separation or divorce which usually make the children or product of the marriage to be vulnerable to various hazards of life.

The Holy Quran 17: 32 refers to ''And do not approach unlawful sexual intercourse. Indeed, it is ever an immorality and is evil as a way.'' What a great act of socio-spiritual implication. The counseling factors in the marriage institution is very essential to maintain and sustain it. For example, Ephesians 4: 21-25, ''21 when you heard about Christ and were taught in him in accordance with the truth that is in Jesus. 22 You were taught, with regard to your former way of life, to put off your old self, which is being corrupted by its deceitful desires; 23 to be made new in the attitude of your minds; 24 and to put on the new self, created to be like God in true righteousness and holiness.

25 Therefore each of you must put off falsehood and speak truthfully to your neighbor, for we are all members of one body.'' This is a counsel for husbands and wives on mutual relationships.''

In the same way, Quran 4: 34, emphasizes the process of convening, maintaining, and sustaining marriage which usually among human being always goes through the rigor of declining stages in relationships. The courtship period with glowing love region or cosmetic values usually blindfolds the intending couples about the reality of themselves. The wedding night is known to be a honeymoon period, before a year of the marriage, there is a reality check, then after a year, couples expect the following declining stages which must be managed effectively, he nagging period, suspicious management period, threat region and possibly third party intervention, the purple riot decision region metamorphosing into coping dope or separation threat.

The Holy Quran 4: 34 states that ''Men are the caretakers of women, as men have been provisioned by Allah over women and tasked with supporting them financially. And righteous women are devoutly obedient and, when alone, protective of what Allah has entrusted them with.1And if you sense ill-conduct from your women, advise them ˹first˺, ˹if they persist,˺ do not share their beds, ˹but if they still persist,˺ then discipline them ˹gently˺. But if they change their ways, do not be unjust to them. Surely Allah is Most High, All-Great.'' For the women, their responsibilities in the home must be based '' therefore the righteous women are devoutly obedient and guard in the husband's absence what Allah would have them, guard.''

In the same verse, the almighty Allah says men must be tolerable and super counselors who teach patience through a clear understanding, until there is a change in the character of the woman for good, who the men must not cheat, but rule over them through the fear of God. The marriage institution is sacred and must be revered as such to be able to generate good and reliable homes that would produce good future leaders for the nation to move forward.