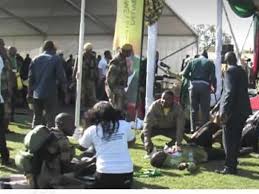 Three Journalists were injured when  an explosion disrupted last Saturday's  ZANU-PF  political rally at the Bulawayo White Stadium in Zimbabwe.

The political rally had in attendance President Emmerson Mnangagwa, who was there to campaign, ahead of the July 30 general elections in the country.

The three Journalists who were injured work for the Zimbabwe Broadcasting Corporation(ZBC), they are Cameraman Coster Thole, Technician Chipo Five, and Producer Forget Tsododo.

Although President Mnangagwa escaped unhurt, the source of the blast has not yet been uncovered, while security agencies step up investigations