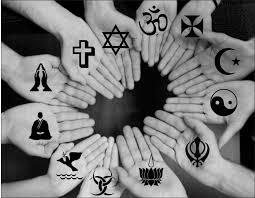 Socio-Spiritual Discipline is a Focus of all Religions

Peace and development are highly essential in achieving peaceful co-existence  among people of diverse opinions,  tribal inclinations, ethnic leanings and segregated economic classes. Social justice and regulatory policies are equally vital enabling environment for development and peaceful co-existence. Unfortunately, they hardly exist in many nations where we experience insurgence, war, agitations and violence that not only lead to value erosion  and disruption of ethical principles.  The summary of it all, is individual attitudinal challenges bothering on moral laxity of institutional indiscipline.

Reviving all agents of socialization on this to help arrest the situation and restore values is a task that must be given attention by every stakeholder, parents, religious houses and the media are inclusive. This will help us have disciplined people with high moral consciousness in all our challenging leadership positions, civil servants and government in particular, to role model organizational and professional ethics into people's psyche for the purpose of achieving and putting in place the culture of ethical practices to be able to live exemplary lifestyles. The Holy Bible, Prov. 25 : 28, emphasizes that  without moral discipline one becomes  vulnerable to acts of waywardness and frivolities just like Nigeria  with porous borders, where foreigners come in with ease to take up sensitive positions  of power, in the process looting without conscience and raping with impunity, in addition to maiming and killing defenseless Nigerians.

The Holy Prophet Mohammad from the Islamic perspective emphasizes that the bedrock of any jihad is that of moral discipline. On this submission, Jesus Christ in Matt. 5 :19 asserts  that good citizenship reflects in the ability to obey   the rules of law and live by its code of conduct; otherwise one would become anti-societal  and would be vulnerable to punishment  in the hands of the l;aw and that such a person will equally be rejected in the kingdom of God.

The implication of this, is that apart from becoming sinful, the society would perceive the individual as a criminal.

Unfortunately in Nigeria, criminals are  celebrated and they mostly preferred to occupy sensitive positions  of power, by this, we murder peace and development.

The Holy Prophet Mohammad was admonished by Allah  in the Holy Quaran to be scripture compliant  as an exemplar and this is attested to in the various verses of the Holy Quaran. For example Quaran 6 : 162-163,''''Truly my prayer and my service, my life and my death, are all for Allah, the Cherisher of the world no partner art He : this am I commanded and I am the first of those  who submit to His will to be  qualified and regarded as a Muslim. The almighty equally commanded that the whole world must follow the foot steps of  the Holy Prophet Mohammad as an exemplar''. In Quaran 33 : 21 and 33 : 46, the almighty Allah identifys  himself with im that he is the one who made Mohammad ad one  who invites  to Allah's grace by His leave, and as  a lamb spreading light. For the above reasons the Holy Prophet Mohammad was able  to declare the following as parting gift to mankind, '' two things I am leaving behind, the Holy Quaran which a a compendium of  the word of God for human affairs  to be well regulated (Sunnatallahi). I am equally leaving behind my Toreeq or Sunnat, if you follow the two religiously, that is to the letter, you will never be misguided neither will you go astray. Al these are the challenges before I and you  as mortals, to live exemplary lifestyles without impunity but consciously based on moral discipline. We are supposed to be either true Christians or true Muslims as well as  adherents of all considered worthy religions whose doctrines or tenets are based on God and Godliness, light and good character that can present us as a race living upon the principle of love  they neighbor  as thyself. Be morally conscious.