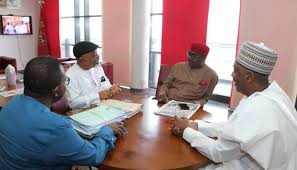 The recently suspended nationwide strike action embarked upon by health workers in Nigeria has exposed how the Federal Government has destroyed the essence of trade unionism in the country.

Some days before the strike was called off, the management of the University College Hospital(UCH) Ibadan, had issued a circular directing all workers in the hospital to resume within 48 hours or risk dismissal. This, it was gathered, was with the knowledge of some union leaders in the hospital.

Indeed, workers in Nigeria have for long called to question the sincerity of their union leaders, in representing their interests, transparently.

Not long ago, Non Academic Staff in Nigerian universities suspended their industrial action.

According to the Chairman of the University of Ibadan, branch of the Non Academic Staff of Union, Comrade Oluwasegun Arojo, although the government threatened to invoke the ''No work No Pay rule'', the workers were paid for the duration they were on strike.

''Government was threatening not to pay us, but after the whole threats, the matter was resolved amicably. And government decided to pay our members for all the period that they downed tools. Even though our major demands have not been met, we hope that the government will change its style of leadership and do the needful'', Comrade Arojo disclosed.

Interestingly, a circular issued by the Head of Hospital Administration, Dr. J.O Amedu, for the Minister of Health, Prof. Isaac Adewole, announced that all salaries would not be paid to those who embarked on strike. The circular referred to the provision of section 43 of the Trade Dispute Act CAP 18, Law of the Federation of Nigeria, 2004 and  International Labour Organization's principles concerning employers' rights during strike in essential services, to justify its action.

However, the National Coordinator of the All Workers Convergence(AWC)Comrade Andrew Emelieze opines that workers have the right to go on strike.

''To the issue of the pronouncement that workers' salaries, who went on strike would not be paid for the period that the strike lasted, this is an aberration, more of an abnormality, especially when the labour act allows for legitimate strikes been a tool for negotiation. Workers have the right to get paid. Even in line with the International Labour Organization's position, strikes are legitimate, it is a legal tool to make demands and encourage productivity''.

''Hence, as such workers pay within that period is guaranteed. More so, government was the cause of the strike and should be held accountable for all the shortcomings concerning the lock out, whereby government refused to meet the demands of the workers, thereby making it impossible for them to be at work. On this note, government must pay their salaries or else government should be ready for another dispute'', Comrade Emelieze concluded.

Interestingly, workers of the UCH, Ibadan are yet to be paid for April and May, according to the  Chairman Joint Health Sector Union(JOHESU) of the hospital, Comrade Olusegun  Sotiloye.

''The circular issued by the UCH management was not enough to scare us, right now we are yet to receive the April and May salaries, while we wait patiently for the intervention of the Senate President, as he promised. Workers should remain calm, while we wait for the dividends of the strike'',.Comrade Sotiloye stated.

Sadly, health workers in Oyo state insist that thy are at a lose, over why the strike was suspended.

''We have a number of demands that are yet to be met by the Oyo state Government, and yet we are back to work'', they lamented.

They also argue that their union leaders have been compromised by the state  government, that was why there has not been an headway in the agitation for their demands to be met.

''The routine is becoming monotonous, our leaders will call us out on strike and after sometime, such strikes are suspended, without meeting our demands. If Nigerians are saying our leaders have been compromised, they are correct'', the workers speaking incognito revealed.

However, an attempt to get the response of the JOHESU Chairperson, Comrade R.A. Afonja met a brick wall at the unions secretariat at Yemetu, in Ibadan, as the Chairperson's response was '' is it by force to speak, please excuse us''.

The coming days and weeks, would only serve to outline how the some officials of the present administration and union leaders in the country have systematically destroyed trade unionism and hope for an improved and efficient workforce.