Helpless Nigerians Still in The Claws of Slave Labour 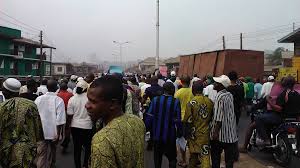 Helpless Nigerians have raised the alarm over the continuous implementation of the policy of casualization by both the public and private sectors.

They lament that the companies  are  both local and foreign  owned, while stressing that the high unemployment rate was the source of inspiration of these companies.

The companies hide under the guise of outsourcing the recruitment of casual workers to promote slave labour.

Recently aggrieved casual workers of a biscuit and poultry products factory located in Ibadan, Nigeria protested at their respective places of work to bring to the notice of the public their harrowing  experiences.

One of the  workers at the biscuit factory speaking incognito, painted a pitiable picture.

''In this factory we work on three shifts of eight hours, there is no break. And the pay is so meagre. The management treats workers like slaves, we are not allowed to take our phones into the factory, we are not allowed to eat, if a worker has an accident while working such a workers would be queried. For the eight hours work, a worker must not sleep. As at now, three workers, who had accidents while working in September are still coming to work with their injuries. And our salaries are between N14,000, N16,000 and N17,000 per month. For me my salary is below N12,000'', the mpoverished worker lamented.

Another worker at the poultry products factory disclosed that for several years ,casual workers have been shortchanged in the name of outsourcing the recruitment of casual workers.

A man at the factory, who simply gave his name as Emmanuel  disclosed that the contract of the  company in charge of the casual workers had been terminated, while stressing that the workers wages had been increased by N300.00.

In his reaction to the development , the Natonal coordnator of the All Workers Convergence(AWC)Comrade Andrew Emelieze casualization was also the trend in government owned establishments.

''It is unfortunate that Nigerians workers have been maltreated all these years, this has been the case all the while, it did not start today. The issue of casualization does not only affect the private sector, but also the public sector.''

'' The postion of AWC is that workers should continuously protest their pilght and other workers should also protest in solldarity to end slave labour and slave wages. The Federal Ministry of Labour and Prodcutivity should initiate policies to save  Nigerian workers from casualization.''

At the University of Ibadan, non academic staff lament that management staff of the institution, compel junior workers to work after the official closing hours of 4.00pm for personal purposes without extra wages.

In his reaction, the branch Chairman of the Non Academic Staff Union(NSAU)Comrade Oluwasegun Arojo maintained that it was unethical for any staff of the university to subject to such an inhuman treatment.

''I think it is unethical for any staff to compel his surbordinate to work etra hours with compesation. The  extant rule permits that when you do extra work, you must receive  over-time pay. If at all it is happening it is barbaric. And those involved should desist from such act  forthwith. It could lead to crisis. Anyone affected should report to the union leaders in the university'', Comrade Arojo stated.