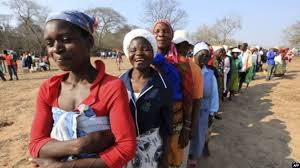 Devolution of Power must not have Political Coloration-Zimbabwe Women

As the administration of  Zimbabwe President,  Emmerson Mnangagwa prepares to deliver good governance   women of  Mashonaland  province  have called on government to ensure that the process of decentralizing powers is bereft of political considerations.

This call was made recently by  women from the rural province during an interactive session organized by the Institute for Young Women Development,  for women of Mashonaland and their   representatives in the Parliament , at  Bindura .

One of the participants from Guruve, stressed that the discussions on devolution must be apolitical saying  "What is required in particular is for national officials (both political and administrative) to commit to a devolution process that respects the rules of the game. Importantly, if devolution is to succeed it should be a shared objective supported by both those with and without power as well as by the general citizenry."

Another participant, Margret Chimombe from Shamva  suggested that the lawmakers should educate the women on the aims and objectives of the proposed devolution of power, adding ''"It's only a few people who are aware of what this is about. Some are in the dark so it should the duty of office bearer to come down to us and tell us what this animal is all about before any other engagements."

In her submission, Member of Parliament for Women's Quota Bindura-Shamva constituency, Dorothy Mashonganyika  warned the women to be wary of politicians who might want to use the process to feather their nets saying ''We do not want political involvement but let us respect political structures as they also play a part in representing our views''.

President Mnangagwa had indicated that his administration would implement  decentralize power.during his  2018-2022  tenure, but the people of Zimbabwe  have been expressing fears that politicians  would hijack the process  to further their political  agenda.