Nigerian Politics and the Peoples' Predicament 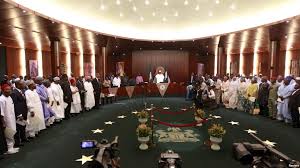 In politics, lessons are repeatedly taught and learnt. It is now left for those involved to modify their gains and loses to suit the situation they eventually find themselves.

Regrettably, the laws of Niccolo Machiavelli have all along been wrongly applied in this clime.

After the Peoples Democratic Party(PDP) convention in 2003, Chief Barnabas Gemade made spirited attempts to be adopted as the Presidential candidate of the United Nigeria Peoples Party(UNPP), but failed. This was Chief Gemade's fall back option, when his future in the PDP became uncertain.

Indeed, Chief Gemade was the backbone of the UNPP, in his home state, Benue, even though he was a card carrying member of the PDP. Not surprisingly, meetings were held in his home, with Chief Gemade in attendance. Of note, is that is followers held him in high esteem.

Curiously, it was discovered that the former PDP National Chairman, contested the Presidential primaries, alongside, Chief Olusegun Obasanjo, with the intention to use same as a bargaining chip to persuade the then President to compensate him with a 'mouth watering' political appointment. This did not sail through.

Indeed, double standards, as a means to an end in politics has become a unique brand in Nigerian politics.

Chief Gemade began losing his followers, after he abandoned Senator Daniel Saror, who he successfully convinced to let go of his senatorial ambition to contest for the Benue governorship seat on the platform of the UNPP.

To be extra sure that Senator Saror abandoned his ambition, Chief Gemade boosted his morale financially and that was how Senator Saror was able to purchase the UNPP nomination form for a whooping N2 million.

Interestingly, at the Swange cinema hall, Makurdi venue of the governorship primaries, Chief Gemade, with the financial backing of a political money bag, Usman Abubakar(a.k.a Young Alhaji) influenced the leadership of the UNPP in the state to adopt Mike Mku, instead of Senator Saror as the party's Gubernatorial candidate.

Already, aspirants for elective positions in future elections are aligning and re aligning, while hinging their intentions on optimism.

Indeed, a sizable number of these aspirants rely solely on optimism and money(for the money bags), as a strategy to hoodwink their competent opponents to the bargaining table, with hope that rewarding agreements would be made.

With this in mind, the average Nigerian, contending with insecurity and economic hardships, brought about by bad governance, is of the hope that the same quality of political office holders, presently on display, would not re-emerge to torment and torture all and sundry in a new dispensation.