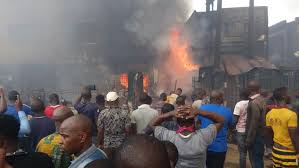 Victims of Onitsha Fire Disaster want state Govt. to Deal with them Directly

Victims of the recent fire disaster at  Onitsha main market,in  Anambra state have called on the state Government to deal directly with them rather than going through unions.

The victims made this call through their spokespersons of the victims, Mr. Anthony, Chinedu Okonkwo, and Chief Uchenna Udaegbe.

''We lost over N20 billion to the fire disaster and some people are trying to use it to enrich themselves by diverting the donation. Government should deal directly with the affected persons and not through any union,” the victims disclosed.