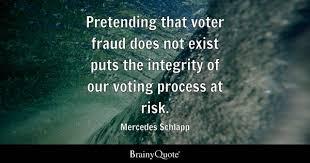 “Voter intimidation is a federal crime and any attempt to harass or discourage citizens from voting at our state’s secure election drop boxes will be investigated and prosecuted in federal court, said U.S. Attorney Brown.  “We recognize and revere the First Amendment right to free speech and political debate.  But there is a time when protected speech turns into acts of intimidation or threats of violence.  We will work with our law enforcement partners to investigate threats of violence, hate crimes, and any effort to intimidate voters or those tasked with ensuring free and fair elections in our state.”

Under federal law, it is a felony to intimidate or threaten other persons to discourage them from voting or for assisting others in voting.  This crime is punishable by up to five years in prison.  Federal law also prohibits bribing voters, buying and selling votes, impersonating voters, altering vote tallies, stuffing ballot boxes, and marking ballots for voters against their wishes or without their input.  It also contains special protections for the rights of voters and provides that they can vote free from acts that intimidate or harass them.  Further, federal law protects the right of voters to mark their own ballot or to be assisted by a person of their choice (where voters need assistance because of disability or illiteracy).

Through the primary and general election periods, the U.S. Attorney’s Office will have District Election Officer Seth Wilkinson working with the FBI and other law enforcement agencies to investigate and respond to any reports of voter intimidation or threats. Assistant United States Attorney Wilkinson can be reached at (206) 553-7970 and ask to leave a message with the Civil Rights complaint hotline.  The local FBI field office can be reached by the public at (206) 622-0460.