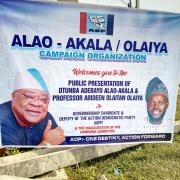 A former Governor of Oyo state, who is also the governsorship candidate of the Action Democratic Party in the state, Otunba(Dr.)Christopher Adebayo Alao-Akala has expressed worry over the covert moves by some personnel of the Independent National Electoral Commission(INEC) and the All Progressives Congress(APC) in the state to move eligible voters from their Local Governments to  different ones to facilitate a new dimension of  rigging.

Otunba Alao-Akala made this disclosure on Tuesday,  in an address he delivered at the  Official presentation  of the ADP governorship candidate, his deputy and other candidates for the 2019 Gubernatorial Elections in Ibadan, Nigeria.

''May I use this occasion to inform the stakeholders in the Nigerian electoral system and the world at large that information reaching us from competent sources is that some bad elecments in the Independent National Electoral Commission(INEC) are conniving with the ruling APC to disenfranchise thousands of voters across the state and weakening the leading oppositiom candidates in their strongholds by engaging in state-wide illegal relocation of voters from their units/Local Government of origins to other units/LGAs''.

The former Governor called on the INEC Chairman Prof. Mahmud Yakub and the security agencies to ''put a stop to this advanced rigging method''.

He assured the people of the state that candidates of the ADP were passionate about delivering results that shall impact positively on them, adding ''I must say that the re-election of the present administration was an aberration that came by way of the bandwagon effect that followed the election of President Muhammadu Buhari''.

''Regardless of the sinister moves of other parties, our campaign shall be issue-based, violence free and intellectually stimulating, resting on the renewed 13-point agenda drawn from our party's hallmarks; all these clothed in peace and tranquility'', Otunba Alao-Akala stated.