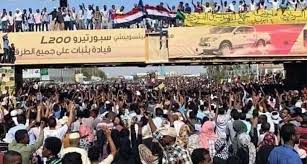 Protesters in Sudan have continued their  protests outside the Army headquarters in Khartoum demanding the resignation of President Omar al-Bashir.

Alleged attempts by  government security forces to break the ranks of the protesters  were resisted by  soldiers who protected the protesters.

Attacks by students militias, anti-riot policemen and government security forces have not deterred the protesters.

Interestingly, Sudanese traders in Juba have declared that  they stand in solidarity with their brothers and sisters back home.

"I support with all my power the change in Sudan because change must be now, at this time on these days. (We) must take al-Bashir out," Isim Assam Abdallah, a trader disclosed