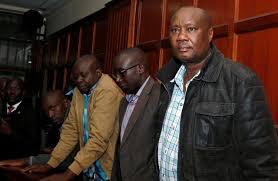 Busia Governor, Sospeter Ojaamong and three County Ministers  were on Wednesday arraigned before the Milimani, Nairobi, Anti-Corruption Court on a 7 count charge of corruption.

Before now the accused persons had been detained at the Integrity Centre -the headquarters of the Ethics and Anti-Corruption Commission (EACC).

Others arraigned alongside the Governor are Mr Bernard Yaite, Mr Allan Ekweny and Mr Samuel Ombui, who are County Ministers.

Charges against them include defrauding the County of Sh 8 million.

Other charges are abuse of office, conspiracy to commit an economic crime and engaging in a project without proper planning.

Also, they were charged for  willful failure to comply with the law relating to management of public funds and fraudulent acquisition of public property.

The accused persons peladed not guilty to the charges.