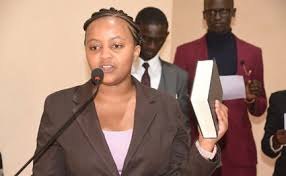 A  300 level law undergraduate has become the first female chairperson of the University of Nairobi Students Association.

The process was facilitated through the electoral college and was presided over by Prof. Mohamed Jamaa.

Ms Mwangi will take over from Mr Antony Manyara who has been the chairman of the association since 2018.

The election is the second after  the signing into law of the Universities Amendment Act in 2016 by President Uhuru Kenyatta.

The Act states that  the students association is to be governed by a student council comprising a chairperson and a vice chairperson who must be of the opposite gender, a treasurer, a secretary-general, and three other members to represent special interests of students.

Those elected in leadership positions must reflect national diversity and the council cannot have more than two-thirds of its members being of the same gender.