Govt. does not want to pay the New National Minimum wage-AWC 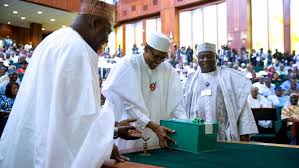 The All Workers Convergence(AWC) has described the delay in assenting to the new national minimum wage by President Muhammadu Buhari as another stage in the game of deceit.

The AWC is made this postion known through its National Coordinator, Comrade Andrew Emelieze.

‘’The drama has been from one ugly occurrence to the other. The totality of it all is that President Muhammadu Buhari has shown that he is at the center of this game, calling the shots and he has been able to prove that he is not willing to pay the new national minimum wage, except through struggle and confrontation by the Nigerian workers, without which workers would continue to be entangled in the endless web of deceit in a bid to actualize the new national minimum wage’’.

‘’It is very painful that the government is continuing with the game, if not what is the explanation for the different scheming by government aimed at externally postponing the actualization of the new national minimum wage’’, Comrade Emelieze noted.